Minutes from THE ANNUAL GENERAL MEETING 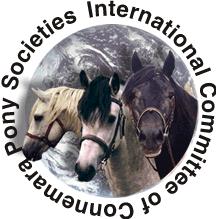 Tuula Pyoria, the Chairperson for the ICCPS opened the meeting and welcomed everyone to the annual ICCPS AGM. As there were several new Delegates, everyone briefly presented himself/herself. Since this AGM was preceded by a very productive morning meeting discussing Classification and Inspection Rules (organized by the CPBS and chaired by Andy O’Donoghue), Tuula hoped that we could proceed through the Agenda, as quickly as possible.

Tuula wondered if the CPBS had written a letter to the South African Society accepting them into the ICCPS. Dermot Power said he had been in contact with people in the Society but had not finalized details.

Sarah Hodgkins asked for a Database update. There was general disappointment about the information as organized and presented by Alex O’Connor. Dermot said that the CPBS was hoping to have all ponies with a unique identifying number and 3 generations. He admitted that there was not much progress. Andy said there was a question about ‘who owned the Database’. Because the CPBS was not getting a response from Alex, a competitive bid was offered to create a new Database and Search Engine. John Riordan said Eamonn MacLochlainn has created new ancestry fields (where bred/born) in a new configuration. Alex is not offering to cooperate to share the data. Susan suggested that the countries could resend their pedigree information to Eamonn if Alex is not forthcoming, soon.

Tuula said 1000 Euros had been paid by the ICCPS to Timmy Kreuzer and the German society for the participation to Equitana in Germany, as discussed at the 2010 meeting and confirmed after the society’s application to the ex board. She said that this is money was well spent to promote the Connemara Pony.

3. Presentation of President’s Annual ReportTuula Pyoria read the President’s written report to the Delegates; promised to send it via email to all the Societies, and post it on the ICCPS website.

his PR help from “down under”.  She hopes the Societies will follow Jenny Hagenblad’s example and send regular, short reports for the web. Hopefully, Societies will have something new to tell.

CPBS: Tuula thanked Andy for the morning meeting hoping that there will be positive results. In the past, Tuula felt that the CPBS was not fully aware of the ICCPS. Now, she hopes there will be better understanding and lines of communication so we can solve problems in the future.

Tuula thanked Susan McConnell for her help during the year.

Prefix List: Tuula has been compiling prefixes. She hopes that there will be complete, worldwide list so people can see what names are not available – to avoid duplicates. She would be very happy to get the French suffixes.

Showcases: WEG and Equitana (Germany) are examples of events that showcase the Connemara Pony. Tuula suggests that the ICCPS tries to support the breed around the world.

Permanent Agenda Item: the International Rules have been discussed every year; however, everyone wants/needs one, simple set of Rules that is compatible on the same principles. Tuula feels that this morning’s meeting should be helpful – positive. There might still be problems but as much to solve.

Communication: Tuula would like to see the Societies be more active throughout the year.

Tuula wishes every success to the CPBS for show week. Hopefully, there will be sunshine so we can enjoy the beautiful ponies.

2.) Horse of the Year (Olympia, UK) Dermot wants 1,000 euros for a stand with staffing. Motion by Andy and seconded by Pat Mullin Tuula looks forward to plans and proposals.

5. ICCPS Annual Reports
Susan McConnell thanked all the Societies for completing and circulating their information in a timely manner. Reports were previously circulated via email. Ireland promises to circulate their information.

Dermot said that after reading the reports he feels that some Societies could be very fragile. The key is greater cooperation and better communication. All Societies exist on a limited budget; limited number of foals (4, 20, 65); across the whole spectrum. Dermot feels that there should be funding available to the overseas Societies that exist on limited budgets.

Andy noted that there are 2 fully formed, licensed Societies operating in Belgium. He will contact the other Society and bring them to the table.

Madeleine would like the form to meet the new Classes (1, 2, and 3) as well as How many shows? How many ponies are inspected and where they end up? Mares inspected? Sport Section?

Tuula, Madeleine and Dermot plan to work on the report form so it is easy to complete with relevant information.

7. Office Bearers: Norway, Belgium and Great Britain could step down. They announced that they were available for nomination.

Andy said that he would like Dermot to serve on the ICCPS Executive Board in his place.

Motion by Dermot and seconded by Padraic Heanue for Australia to serve on the executive Board.

Because there are 4 countries (NO, GB, AUST and BE) for 3 positions, there was a secret ballot. The voting result was: Norway, Great Britain and Australia for the Executive Board. Tuula Pyoria was elected Chair for the next 12 months along with the following Officers.

8. Vet Inspection ~ both colt and filly ~ clear instructions from CPBS what are the conditions thatcause a pony to fail the vet. What if something is marked by the vet?

After a thorough discussion it was decided that the CPBS will contact the vet college for a list of conditions that could cause a pony to fail inspection. Henrietta Knight requested that all countries submit information, in case there are differences.

Andy talked about sweet itch. It has not been decided that it is hereditary. Although the CPBS is slow to put a pony into Class 1 with sweet itch, there is no “test”. Karen said it was a “skin condition”. Madeleine said that there were too few Connemara Pony samples sent from Ireland within the Swedish project of finding a possible gene detector for sweet itch, but the work has continued within the Icelandic Horse population and she will forward any available information to the CPBS.

John Riordan said the pony is presented and inspected on the day. The inspectors look on the day for the placing in the classes.

Tuula felt that if there is a list of conditions, then, it should be easier to handle a problem.

Andy promised that he would discuss a vet evaluation form and list with the CPBS Council and/or vet/vet college and be back in touch within 2 months.

9. Promotion of the Connemara pony ~ worldwide in the coming year

UK = Horse of the Year ~ Andy said that 2012 is the 100th Anniversary of Michael O’Malley’s ride and promotion of the Connemara Pony. Madeleine agreed that something “special” should happen (possibly ponies from Europe coming to Olympia for demonstrations).

TV Program Promotion = ½ hour on Horse and Country and its sister channels in USA and Sweden.

10. Meeting closure at 2:50PM
Due to the Olympics in London in 2012, RDS has been moved to the 3rd week in August 2012. The Clifden Pony Show Week will remain as the third Thursday, 16th August 2011. No ICCPS Annual Meeting date was decided.